Feedback from our installers is always useful in helping to develop and modify our products.  We discovered that some of you change the flexible hose supplied with our boilers for a “long-life” hose.

Although the hoses we supply are from a reputable source (Bentone) with a life expectancy of 3-5 years, the fact they’re being changed clearly demonstrates the concerns/ experience you have out there “in the field”. This is no doubt, in part prompted by well documented insurance claims where flexible oil lines have failed just outside the problematic issue of date codes, and also those short “service life periods” prescribed by some.

To “knock these issues on the head” Hounsfield Boilers will in future be supplied with a Teflon flexible oil line hose. Teflon® hoses will outlast a rubber or thermoplastic hose; you’ll find them in places like the space shuttle, air craft landing gear and braking systems. They are a modern equivalent of the Boulter / Europower hoses which, as some of you will know often outlast the lifetime of the boiler. An added advantage is that they are more flexible / less rigid than the Europower hoses.

More details about the Teflon flexible oil line hose below, in an article by Jeffrey O’Hearn of Eaton Corporation.

Three myths exist among hoses made with Teflon®.

Hoses made with a core of Teflon® polytetrafluoroethylene (PTFE) have a richly deserved reputation for outstanding performance under severe application conditions. That’s why they are found in places like the space shuttle, aircraft landing gear and braking systems, and the self-contained breathing apparatus firefighters depend on to keep them safe.

But along with that reputation comes a pervasive belief that hoses made with Teflon® carry a higher acquisition cost necessary only when no other material can meet the requirements. This brings us to the first of three myths about hoses made of Teflon®.

While it is true that the Teflon® PTFE paste used to make high grade hose is a premium material, the hose itself is often a more economical choice than traditional products when total lifecycle-cost is considered. There are a number of factors to consider when comparing hose acquisition cost and performance.

First, in almost all cases a hose made with Teflon® will outlast an ordinary rubber or thermoplastic hose under virtually any operating condition. Obviously, the advantage is greatest under the most severe conditions but it is almost always present, and usually significant. Whether this factor alone is enough to justify the higher initial acquisition cost of a hose made with Teflon® will vary from application to application, but in most cases the answer is “no.”

That begins to change, however, when costs other than initial purchase price are considered:

How much does the scheduled downtime for a hose change cost in terms of lost production, direct labor, hose and fitting inventories, and impact on other dependant processes?

How much does unscheduled downtime due to unpredictable hose failure cost?

How much does contamination caused by the buildup of materials on the I.D. of the hose cost annually?

How much does it cost to replace expensive boiler additives lost to effusion through rubber or thermoplastic steam hose cost?

A good example of the benefits of hoses made with Teflon® can be found in the tire industry. The presses used in tire manufacturing use steam to cure the rubber, water to cool the die, and compressed air to blow the water out of the die prior to introducing steam for the next cycle. A single hose is used to supply steam, water, and air to the press.

The OEM rubber hoses originally supplied with the presses had to be changed every two weeks on average to avoid in-process failures. Replacing them with hoses made with Teflon fluoropolymer and equipped with spring guards to minimize flexing fatigue has extended the hose-change interval to six months. The manufacturer reports that wear is not an issue at the six-month interval, but the hoses are replaced during scheduled press maintenance downtime as a pro-active measure.

Hoses made with Teflon® can also reduce warranty costs for products like commercial/industrial coffee machines that tend to receive little or no maintenance from end users. They also add a factor of safety when used to drain hot products like fryer grease in fast food restaurants.

Other advantages of hoses made with Teflon® can have significant cost impacts in more specialized application areas. For example, carbon will not stick to the Teflon® fluoropolymer core of hoses used as compressor discharge lines. That means the compressor damage caused by pieces of built-up carbon becoming detached from the discharge hose walls and circulating through the system is completely eliminated.

How much does it cost to replace an industrial compressor?

There are also intangible benefits. Hoses made with Teflon® generally have exposed stainless steel braids which lend a look of quality to the equipment to which they are attached. This cosmetic appeal “shows well” to potential customers and helps create a good first impression with potential customers.

The bottom line here is simple. Hoses, like everything else, ought to be evaluated based on their total lifecycle cost, not just their initial acquisition cost. Viewed in this way, hoses made with Teflon very often turn out to be the lowest-cost solution.

The truth is that all hoses tend to kink and crush easily, especially when they are improperly applied. Hoses made with Teflon® are no better or worse than other materials when recommended bend radii and loadings are adhered to.

In applications where kinking or crushing is a possibility, it is a simple matter to add internal or external spring guards to reinforce the hose at critical points. Selecting a hose with thicker walls or a convoluted bore will also minimize kinking and resist crushing.

It is worthwhile to note that a hose made with Teflon® having a convoluted bore has a recommended bend radius that is three to four times tighter than a PTFE hose of the same size with a smooth bore. Convoluted bores also exhibit greater crush resistance in vacuum applications.

The bottom line here is that hoses made with Teflon are no more prone to kinking or crushing than hoses made from other materials as long as they are applied according to the manufacturer’s recommendations. Where those recommendations must be exceeded, special accommodations such as additional guards or reinforcements are required, and that is true regardless of the material with which a hose is made.

Myth 3: All Hoses Made With Teflon®, Are The Same?

The premier PTFE resin used in hose construction is a grade of Teflon® called T62 , the standard in Eaton’s PTFE hoses. Because Teflon T62 is not a thermoplastic, it cannot be continuously extruded, which has traditionally limited the length of hose that can be produced.

This has been addressed by the latest generation of paste extrusion equipment, like that recently installed at Eaton’s Middlesex, N.C., plant that now has the capacity to produce long lengths of PTFE hose. For a one –inch ID hose a 400 ft continuous length is now possible. This is a roughly 400 percent increase compared to older equipment that means fewer joints and less waste for end users.

Flexible oil line hoses made with Teflon® are not the answer for every application, but they can deliver lower lifecycle costs than rubber or thermoplastic hoses in a much broader range of applications than the relatively restricted range for which they are commonly considered. If you have not looked at hoses made with Teflon because you thought they were too expensive, too prone to kinking and crushing, or didn’t have the right physical properties, it may be time to take a second look.

If you would like to know more about the Hounsfield Boilers’ range, call Andrew on 01449 722461or use our contact form.

Keeping up to date with Hounsfield Boilers 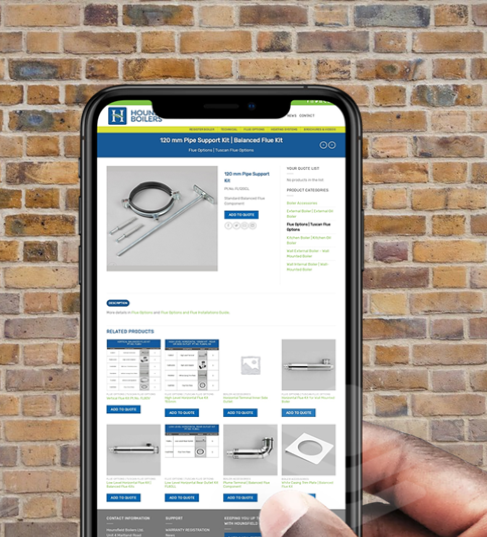