Future of Oil is in the Fields

as published in PHAM News March 2021 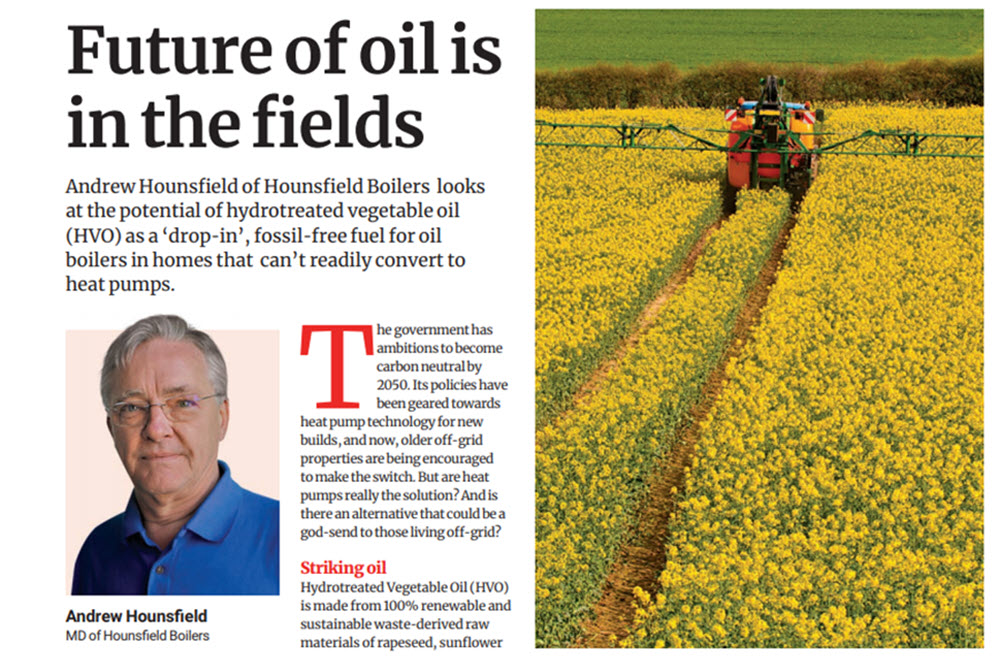 Andrew Hounsfield of Hounsfield Boilers looks at the potential of hydrotreated vegetable oil (HVO) as a ‘drop -in’, fossil -free fuel for oil boilers in homes that can’t readily convert to heat pumps.

The government has ambitions to become carbon neutral by 2050. Its policies have been geared towards heat pump technology for new builds, and now, older off-grid properties are being encouraged to make the switch. But are heat pumps really the solution? And is there an alternative that could be a god-send to those living off-grid?

Hydrotreated Vegetable Oil (HVO) is made from 100% renewable and sustainable waste -derived raw materials of rapeseed, sunflower and other natural oils. The fuel is blended to be a consistent product, so homeowners can
always rely on its performance. Independent research has also found the fuel to have a lower carbon intensity than electricity and biomass, and the use of HVO
also reduces 90% of greenhouse emissions when it replaces oil as a fuel.

Although HVO is still a relatively new product (in the UK), it has been used as a fuel for a variety of uses here, from agricultural vehicles to boats and even for
generators at Glastonbury! However, HVO has some very attractive features for heating engineers and homeowners alike. It is hoped that the fuel can simply
be added to existing oil boilers to power heating systems for off-grid properties for years to come.

OFTEC has also found HVO to have a significant cost saving based on a three
-bedroom dwelling, and with low carbon emissions, this really could be a ‘wonder’ fuel for the 21st century.

Oil, like gas, is not an endless supply, so we have to seek a replacement, but with just a few tweaks to an energy efficient oil boiler, the new HVO fuel
is expected to run incredibly efficiently. It’s really that simple.

Homeowners would only need to call their heating engineer to make slight modifications to the boiler, such as adapting the size of the fuel injector nozzle, fuel pump pressure and blast tube, but after that the new HVO-fired system would run as normal.

Oil boilers, unlike gas, have for some time been reaching over 96% efficiency ratings, which means the new fuel supply will be heading into incredibly energy
efficient machines.

Agricultural vehicles, lorries and many other users are already using HVO, so surely it is only a matter of time before the government realises that oil boilers, instead of being the problem, can actually provide a quick and cost effective solution to the carbon crisis.

Heat pumps I’m sure have their place, especially in new build. But for older style properties, which are reliant upon off-grid fuel sources, the costs are truly eye-watering.

A heat pump is not compatible with everyday radiators – the entire heating system needs to be ripped out of existing properties and new underfloor heating needs to be put in place. Homeowners need to completely redevelop their properties to accommodate these changes and the energy and cost savings are
still questionable. Surely it can’t really be environmentally friendly to rip out a perfectly good heating system and dump it in a recycling center, when a new drop-in fuel can perfectly meet our needs and sustainable promises.

I am passionate about reducing the carbon footprint of the boiler industry and I truly believe that ‘being green’ is more than just the efficiency of the boiler and
what fuels it. We should be having a long hard look at how long our products last. It’s pointless having a highly efficient boiler if it is only built to last ten years
and needs an endless supply of replacement parts during that period. I’ve sourced parts for our boilers which last a lifetime, such as aircraft grade Teflon hoses instead of rubber, and they will not degrade or need replacement.

At Hounsfield we’ve invested in on-going research to ensure our boilers will provide optimum performance with HVO, as I see it as the future for our industry. Given all of the environmental benefits of HVO, I can not understand why the government are not leading research into HVO use in the UK, given the strong carbon-neutral credentials it possesses.

According to OFTEC, HVO in domestic boiler trials in Europe are going very well and the figures looking very encouraging. I am already endurance-testing my boilers to future proof them ready for HVO, and I believe OFTEC should be more proactive lobbying the government to investigate the benefits of HVO. It’s vital for sustainability and for British boiler manufacturers to develop boilers that are HVO ready. As a nation we are already slightly behind the curve, but we can regain ground and even take the lead, but we need support from the government and swift action.